We are officially in full “tax season” swing. Most of you are probably gathering all your documents, some of you may have already delivered the goods to your accountant, heck, some of you may have already filed and got your return (you overachievers!). However, one thing is certain, this tax year looks different than tax years of the past as it’s the first year that the new Tax Cuts and Jobs Act has taken effect.

For starters, the actual tax return is different. The tax return itself has been re-designed with the prior double-sided single page replaced with two half-pages augmented with more supplemental schedules.

While many of us trust our Certified Public Accountants (CPA), accountants, and TurboTax to handle the technical jargon, I wanted to walk through some of the major changes for 2018. Technically, from 2018 to 2025 if you are keeping score at home.

Probably one of the most important parts of the tax return. If you don’t itemize your deductions, this is likely your single biggest deduction to your taxable income on your tax return.

For comparison, here were the past figures from 2017, the standard deduction was $6,350 for single individuals, $9,350 for heads of household or $12,700 for married couples filing jointly.

While the standard deduction was lower in 2017, you still had personal exemptions which we will cover next.

In the past, a taxpayer could reduce their adjusted gross income (AGI) by claiming personal exemptions — generally for the taxpayer, their spouse, and their dependents.

For 2018, all personal exemptions have been suspended through 2025.

So all things being equal, if you have a husband and wife filing their tax return in 2017, they were eligible for two personal exemptions ($8,100) and the standard deduction ($12,700). For a total deduction of $20,800. In 2018, their standard deduction will be $24,000 but no standard deductions. So, in this overly simplified calculation, this seems to be an improvement for our sample client.

This explanation is better served with a picture. As a friendly reminder, we use a marginal tax bracket system in his country, which means that you don’t jump from one tax bracket to the next. As you enter new tax brackets, only the dollars above the last threshold are taxed at that higher rate.

For 2018, The new rules retain seven tax brackets, but the brackets have been modified to lower most tax rates. The new brackets expire in 2027. Keep in mind that the majority of individual income tax changes would be temporary, expiring in 2025.

In the past, there were also seven tax brackets. The rate on the highest earners is 39.6 percent for taxpayers earning above $418,400 for individuals and $470,700 for married couples filing taxes jointly.

From the IRS (their graphic designer must have been on vacation…) 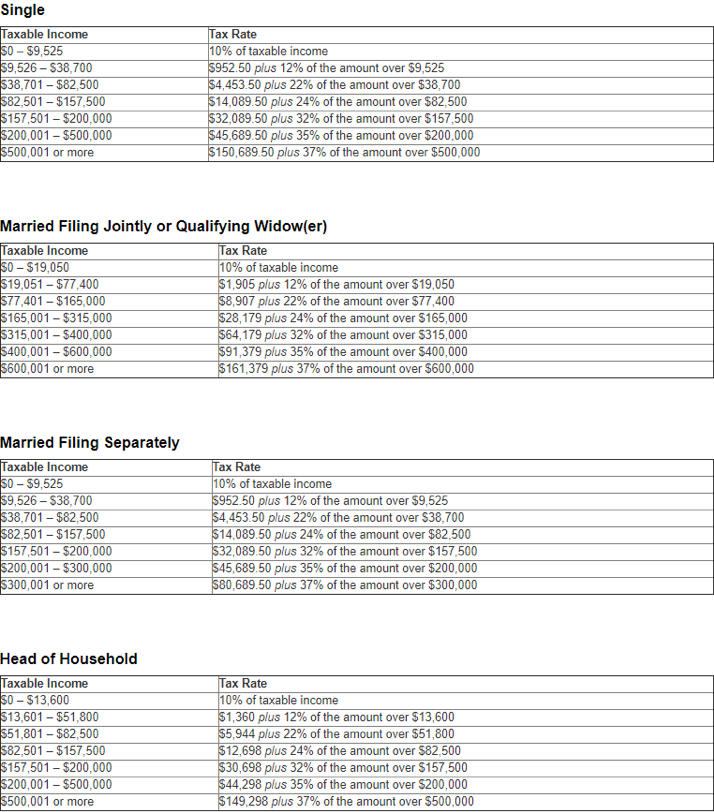 This one also had a pretty good revamp. Finally, we get some money back for those little bundles of expenses, I mean joy, bundles of joy!

In the past, the child tax credit was only $1,000 and the AGI limits were much lower. The credit was reduced by $50 for each $1,000 a taxpayer earns over certain thresholds. The phase-out thresholds started at a Modified Adjusted Gross Income (MAGI) over $75,000 for single individuals and heads of household, $110,000 for married couples filing jointly and $55,000 for married couples filing separately.

It was also a nonrefundable credit through 2017. So it could reduce your tax burden, but anything left over was not eligible for a refund. Essentially the money would disappear.

Many of these updates were pretty substantial, so I guess I don’t have to say it every time, but this one definitely changes financial planning with a few key updates.

For 2018, new homeowners can include mortgage interest paid on up to $750,000 of principal value on a new home in their itemized deductions.

If you bought your home on or before 12/15/17 or refinanced (as long as new mortgage amount does not exceed the amount of debt being refinanced.), the old, $1 million cap continues to apply.

These changes are set to expire after 2025.

Assuming you don’t live in a cave, this was the big news with the 2018 tax code changes. These are known as “SALT,” and for individuals in high-income tax states or cities, this could have a huge effect on your 2018 taxes. This is the change that has played a role in peoples’ decision to move out of NYC and California.

Simply put the old rule had no limits, you were able to include state and local property, income and sales taxes as itemized deductions.

For 2018, Taxpayers are now limited to claiming an itemized deduction of $10,000 in combined state and local income, sales and property taxes, starting in 2018 through 2025.

Pro Tip: If you itemized your deductions in 2017, go to your Schedule A and at the top of the page you will see this, “Taxes You Paid.” Line 9 shows your total in combined state and local income, sales and property taxes. If that number is over $10,000, you itemized deductions will be lower in 2018 if all things stay the same.

Estate Tax: In the past, you had to be pretty wealthy to worry about the federal estate tax. The old limit was $5.49 million. And now (2018), you have to be twice as wealthy with a new limit of $11.2 million.

Moving Expenses: In the past, I never gave this rule too much thought, however, now that we work with so many medical professionals who seem to move across the country at least three times for residency, fellowship and becoming an attending physician, it was a bummer to see this change.

In the past, the moving expense could be deducted as long as you moved a certain distance. Unfortunately, for 2018, these deductions have been suspended until 2025. Certain moving expenses can still be deducted for members of the military.

There you have it -- the biggest updates to your taxes for 2018 through 2025 (for most). My goal was to keep the technical jargon out of this article because we all know taxes are complicated and boring as all heck.

We hope you enjoyed this post! And as always, you should speak to your CPA or accountant for your specific tax questions and details. While I enjoy the tax code and tax planning, I am not a tax expert.

Fidelity is one of the leading investment and financial services companies in the world, providing a full range of trading, broad custody, and reporting services. Fidelity administers clients’ assets via the power and operational experience of one of the strongest brokerage platforms in the business and serves as the custodian for many of our clients at WealthKeel.

WealthHarbor is the exclusive financial planning portal of WealthKeel clients. The portal allows clients to link all of their investments, bank accounts, liabilities, and more to one central, secure website. WealthHarbor helps to organize your financial life and enables you to see the big picture at a single glance.

Vicus is a Federally Registered Investment Advisor that collaborates with WealthKeel to provide robust asset management services for clients. We work with Vicus to create strategic, low-cost investment portfolios by tapping into the best technology in the business. No matter what your specific preferences, goals, and timelines, Vicus empowers us to build the ideal portfolio for your unique financial situation.

At WealthKeel, we want to provide our clients with custom-crafted solutions for every financial need and concern. That’s why, in addition to Fidelity, we work with TD Ameritrade to offer those we serve a range of choices when it comes to partnering with custodians for investment management services.

Black Diamond provides innovative and dynamic portfolio management and performance reporting through an easy-to-use web-based application. Black Diamond gives WealthKeel clients easy access to their accounts and information, so they remain informed, up-to-date, and aware of their investments.