One of your most important financial decisions is how much student loan debt is acceptable to obtain your degree — and with the cost of student loans getting so high, it's important to know how we got here. Over time, American's thoughts about the value of college and the cost of tuition have evolved drastically.

Obtaining your degree should provide you the opportunity to live your best life, not make it worse. We think it's important to understand the true cost of college and to align your debt with your future goals and career aspirations. Today, student loans have skyrocketed to $1.56 trillion with an average balance of $30,000.

What was the world like before we hit $1,560,000,000,000 (yes, $1.56 trillion) in student loan debt? It is a fascinating question that many probably have never thought of, but once upon a time, you could go to college and not have to sell your soul. However, student loans have skyrocketed, and many blame the federal government’s access to debt for the dramatic increase in tuition which led to the increase in loan balances.

Let’s take a walk-through time to see how the tuition bill has evolved.

College was much different 70 years ago. Before World War II (WWII), college was really for the wealthy elite. However, that all changed drastically after WWII with the Servicemen’s Readjustment Act of 1944, known better as the GI Bill of Rights, which made college affordable for veterans. The GI Bill offered up to $500 tuition-free as well as a cost-of-living stipend.

After the GI Bill, 8 million veterans enrolled in college when they were only expecting 800,000 to enroll. This was literally 10 times the amount they expected. With this type of demand they would surely increase tuition, right? Wrong. The states embraced the idea and loved the post-war economy. They were more worried about building infrastructure/campuses to keep up with the demand.

To prove this point, let’s look back at Yale: their tuition didn’t break $3,000 until the late 1960s. It took nearly 20 years to double in tuition with the highest demand seen during that time.

The next big event in student loan history was the National Defense Education Act (NDEA), which was signed into law on September 2, 1958. This later became the Federal Perkins Loan program as many of us know it today. We have the Soviet Union to thank for this when they launched Sputnik, the first-ever satellite. The U.S. and President Eisenhower thought we were falling behind in the tech world. This bill was the equivalent to the non-military Americans’ as the GI bill was to veterans.

The NDEA bill was labeled as a success from the pure numbers play. In 1940, about 500,000 Americans attended college. By 1960, college enrollments had expanded to 3.6 million. By 1970, 7.5 million students were attending colleges in the United States.

Sadly, while the GI Bill was praised for its benefits, many African Americans and women were not seeing the same benefits. Even when it was listed as “all veterans regardless of gender or race,” that was not the case. Many African Americans and women struggled to receive higher education or loans. It was the toughest in the south — they were being directed to menial jobs instead of college. If an African American was able to receive tuition, their college choices were slim. Again, this was much worse in the South, but even in the North, their white peers were having a much easier time enrolling. The same problems faced women since men almost always received enrollment preference.

On November 8, 1965, the Higher Education Act of 1965 was signed into law, and it pushed for greater college access for women & minorities. It increased federal money given to universities, created scholarships, and provided low-interest loans for students.

This led to many more Americans heading off to a college campus. And from about 1962 to 1972, many colleges and universities were providing grants and other aid in addition to the new federal programs. College enrollment jumped again as many knew the government was going to cover part of the bill.

Fun Fact for Title II of NEDA: Title II authorized the provision of student loans and provided terms by which they may be awarded. Initially, Title II provided scholarships (also known as grants), not student loans. However, members of Congress voiced worry about the message sent by giving students a "free ride." The House version of the bill removed scholarship money, while the Senate reduced the amount of scholarship money. By the time the bill was passed into law, student aid was exclusively loan-based. 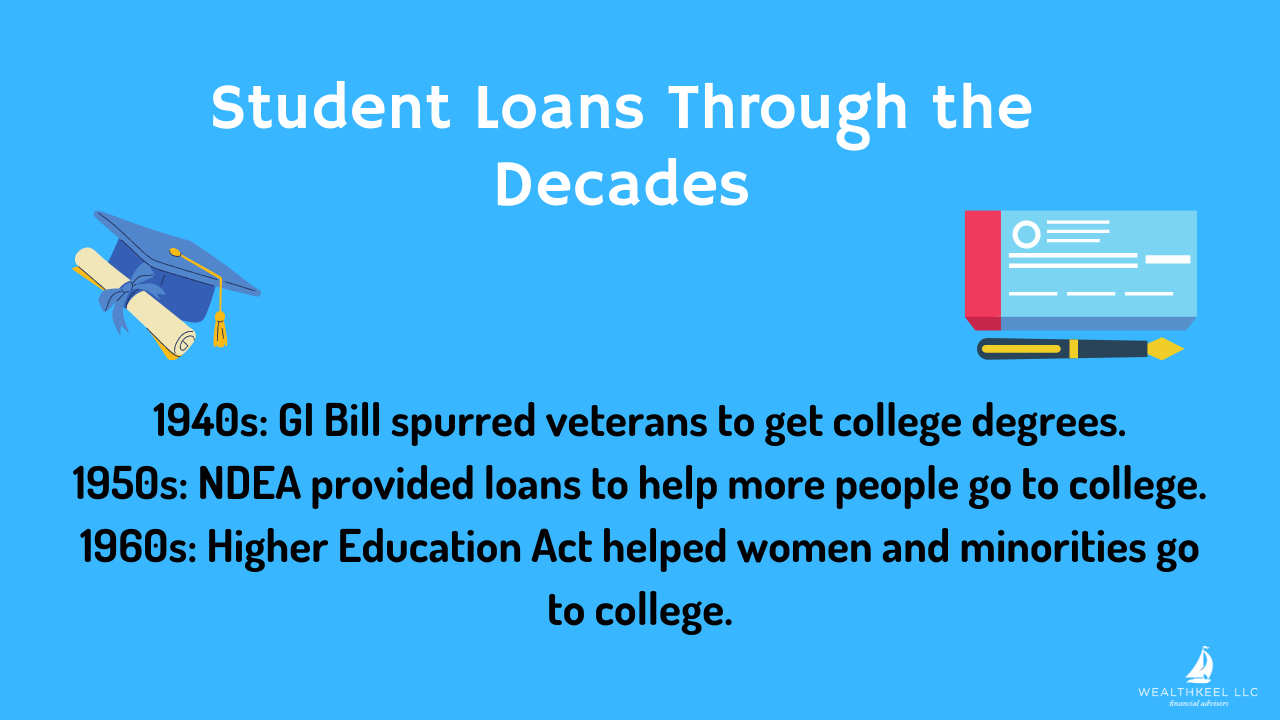 John Thelin, a professor at the University of Kentucky and author of A History of American Higher Education, said this: “With double-digit inflation, an oil embargo, and a sputtering economy, a perfect storm began to build. College tuition and fees climbed as much or more than the inflation rate. Private loans, heavily subsidized by the federal government, gradually replaced federal grants as the main source of money for both poor and middle-class college students.”

When family income fell, borrowing for college became the only way to do it. Many experts say that this drop-in family income was the single biggest reason why college costs rose. Sandy Baum of the Urban Institute said, “While most institutions tried to keep costs down, some took advantage of the public perception that a high tuition means a quality education.”

We metaphorically showed our hand as a society. We showed that we were willing to take on debt (do whatever it takes) to get a college education. As we later found out, the government was happy to lend money out in truckloads for unsuspecting young adults who to this day have no idea what a promissory note is.

America got caught in the game of “price = quality.” But unfortunately, that is not the case, and while the Ivy Leagues may have some weight that comes with the name, many colleges and universities don’t carry that weight but still charge outrageous tuition.

By 1970, you could see the change occurring. By 1980, the tuition trend was nearly vertical, and it has not looked back since.

As of 2011, students were covering 25% of the total tuition bill and states were covering 23.1%. This was the first time in history where those figures crossed. As recently as 2003, the balance was 32% state and only 17% from the individual.

While it’s hard to say one thing has led to this crazy increase, there is pretty good agreement that the states have had a major effect, especially on the public system. If you adjust for inflation, state funding for higher education has fallen more than $7 billion since 2008, before the Great Recession caused deep cuts in spending on public two- and four-year colleges, according to a report from the Center on Budget and Policy Priorities (CBPP).

I know what you’re thinking: “but we recovered from that recession.” Correct, but higher education funding has been (very) slow to increase. Funding was largely flat from the 2017-18 to 2018-19 academic years, with an average 3.4% increase per student in 18 states and an average 2.6% decline in 31 states.

There is also good data from the NY Fed showing that since the Dot Com bubble burst, state funding has decreased.

The report also noted that four-year public college tuition increased by 36% from 2008 to 2018, which can be linked to reduced state funding. As you can imagine, that number has outpaced the median family income.

So looking in the rearview mirror, there were some major milestones that lead to drastic increases in enrollment. Whether it was the GI Bill in the 40s, NDEA in 50s or the Higher Education Act in the 60s, none of those major events are tied to drastic tuition increase even though they had a drastic increase in enrollment. It was not until the late 70s and early 80s that a few macroeconomic events, double-digit inflation, an oil embargo, and a sputtering economy showed our hand. It showed that we were “okay” taking loans for college educations. The next major event was the '08 Great Recession that crushed state-level funding. And now we arrive here today. So what types of effects is this having today?

Let’s hit some facts first and go from there.

Student loans are affecting us on a mental level, financial level, and even the overall macroeconomic level.

The current cost of education mixed with the incredibly easy access to student loans for young adults who truly do not know any better is a dangerous game. And something will have to give.

There is one “bright spot.” While there is a lot of concern and chatter about the “student loan bubble bursting” and leading us into the next great recession, the facts do not support the argument. The mortgage crisis was a much larger number; in 2007 it peaked at $10 trillion and had an average debt balance of $145,000. Today, student loans are “only” at $1.5 trillion (still growing though) with an average balance of $30,000. The student loan market is a much smaller market (today) than the mortgage market. So, while this can lead to a continuous drag on the economy, it should not lead to a catastrophic disaster (recession) as the mortgage crisis.

In closing, it's important to understand the cost of college. Don’t take on debt without knowing your future goals. Your overall student debt should be close to 1x your expected salary. If you plan to make $60,000 out of college, you should not take on more than $60,000 in loans. 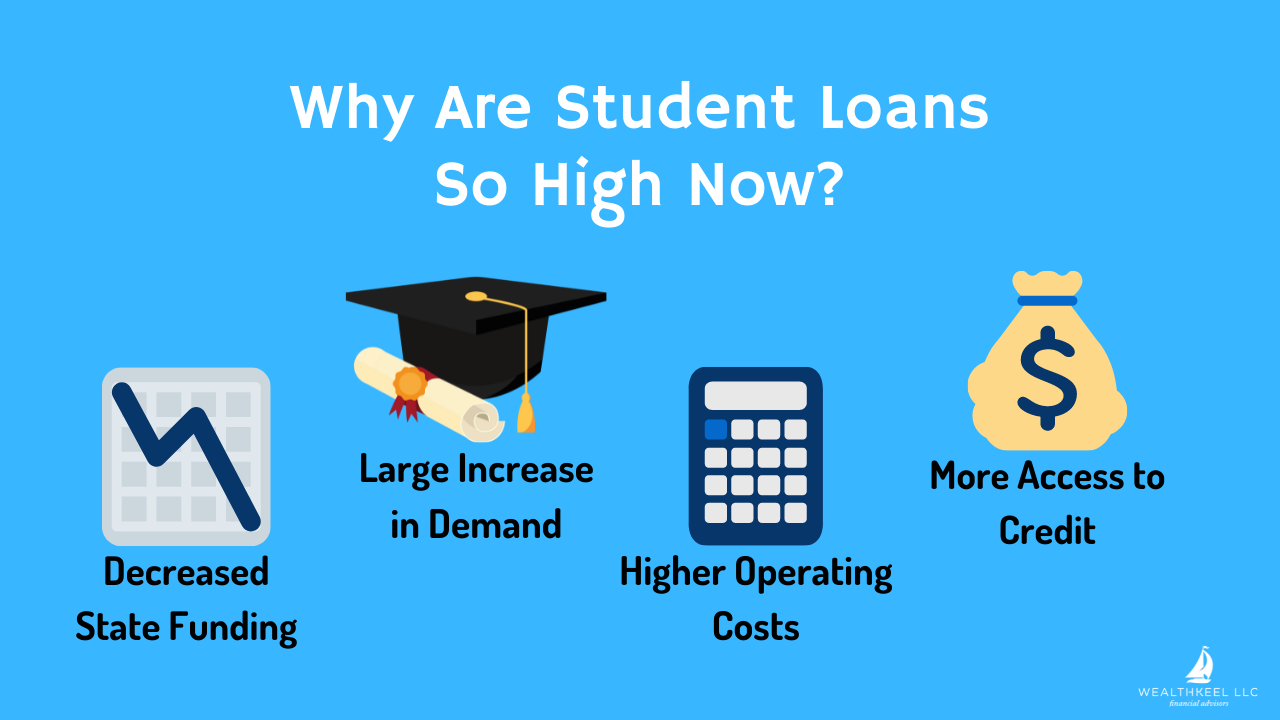 We have a saying that goes like this: 1x is doable, 2x requires some planning, 3x is very difficult to overcome assuming traditional payoff methods (forgiveness options are another conversation and should never be taken as a given). If you plan to make $60,000, but your education will cost $180,000, don’t do it! We work with Gen X & Gen Y physicians who often come to us with more than $250,000 in loans. While some may heave looking at that number, many of them can expect a starting salary north of that figure, and they may have the chance for Public Service Loan Forgiveness.

Know the facts and understand the costs! Obtaining a college degree should provide you the opportunity to live your best life. Don’t allow that degree to ruin you. If you're a doctor, we have a great guide to student loan repayment.

Looking for a more thorough, all-in-one spot for your financial life? Check out our free eBook: A Doctor's Prescription to Comprehensive Financial Wellness [Yes, it will ask for your email 😉]

Fidelity is one of the leading investment and financial services companies in the world, providing a full range of trading, broad custody, and reporting services. Fidelity administers clients’ assets via the power and operational experience of one of the strongest brokerage platforms in the business and serves as the custodian for many of our clients at WealthKeel.

WealthHarbor is the exclusive financial planning portal of WealthKeel clients. The portal allows clients to link all of their investments, bank accounts, liabilities, and more to one central, secure website. WealthHarbor helps to organize your financial life and enables you to see the big picture at a single glance.

Vicus is a Federally Registered Investment Advisor that collaborates with WealthKeel to provide robust asset management services for clients. We work with Vicus to create strategic, low-cost investment portfolios by tapping into the best technology in the business. No matter what your specific preferences, goals, and timelines, Vicus empowers us to build the ideal portfolio for your unique financial situation.

At WealthKeel, we want to provide our clients with custom-crafted solutions for every financial need and concern. That’s why, in addition to Fidelity, we work with TD Ameritrade to offer those we serve a range of choices when it comes to partnering with custodians for investment management services.

Black Diamond provides innovative and dynamic portfolio management and performance reporting through an easy-to-use web-based application. Black Diamond gives WealthKeel clients easy access to their accounts and information, so they remain informed, up-to-date, and aware of their investments.